Listening to Sirius Satellite Radio the other day:﻿
﻿

This song by our favourite Canadian artist is where we came up with the name for the boat.

Posted by Sailing Vessel Still Time at 1:07 PM No comments:


Posted by Sailing Vessel Still Time at 10:43 AM No comments:

I mounted my GOPRO on the bow pullpit:

KEWL
Posted by Sailing Vessel Still Time at 8:00 AM No comments:

Reflections on the 2012 Season

Sitting on the CS34 the evening before haulout looking at my sailing blog.

Here are some stats:
81 times off the dock:

In January, we bare boat chartered a Beneteau 473 for a week in the British Virgin Islands with Walter and Colleen from WYC.  This was our first experience in the Carribean, and we loved it!


Racing on Coug was awesome; I learned a lot from everyone.  We really had a good race in the Susan Hood.  The 300 was a great experience, except for sailing into that hole in Rochester.  Mike, Carson, Chris, and Mark were great to sail with.


Racing on Santeria was awesome.  I love sailing with Neil and Peter; the three of us are better sailors because of the experiences we had together.  Santeria WON the overall title in Newcastle against some 35 ft boats in the fleet.


I was out racing on the C22 2 or 3 times a week.  I love sailing this boat, I know how to get her going, I know she can handle anything that Lake Ontario can throw at her.  John and I really sailed her well this season.
Plans for the C22:
Having said all this, I may sell her in the spring.  Fleet ownership is tough, and I can get my racing fix on other boats.  Would like to do some more cruising on the weekends on the big boat.


Rita and I were out cruising a lot on the CS34.  We slept aboard her a lot during the summer, as the boat is closer to work.  She is comfortable, sails well, and we are starting to get used to her.  She was a great hotel in Port Credit and Hamilton. Cruising to the 1000 Islands was awesome inspite of the motor problems we had. However, we didn't sail her too much after August.  Rita commented that we should rename her to "Part Time"; this is the nature of busy lives and weather for a cruising boat.


Have a lot of work to do in the next couple of weeks after the boats come out of the water.

Posted by Sailing Vessel Still Time at 11:26 PM No comments:

Got down to the club and got the CS34 all ready for haulout.  Levelled BOTH cradles.  Replace the carpet on the pad on the CS34.  Good thing, the carpet was rotted!

Got out on the water with the C22 a little after 3pm.  Winds were forecast to be 15 to 20 knots from the east with a temperature of 15 degress.  With the sun it felt warmer.  Little Still Time had a double reef in the main from last time out, so I hoisted the #3 and went out, coming out of the harbour under sail at 6.1 knots on a close reach.  Perfect amount of sail; little heal, very comfortable. 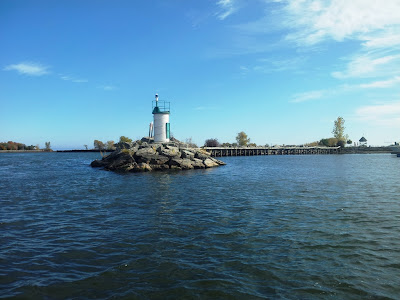 Autohelm kept me going straight whiltst I cleaned and organized below.  Winds diminished the further I went out, but didn't drop below 4 knots of boat speed.  Ended up going 5 miles out into the lake.  On the way back, found some light patches, and decided to shake out the reefs in the mainsail.  With full main, the boat powered up and speed picked up to almost 6 knots.  According the the GPS my max speed was 7.4 knots.

What an awesome sail!

Put the boat in basin where it will be hauled out tomorrow.  Took some time and loosened all the turnbuckles, removed all the lines, and got Wenzle and Jack Dinsdale to help me drop the mast at the dock.  The three of us walked the mast to the rack.  THANKS GUYS!

There was a launch party upstairs at the club.  Great food, great people, great music.  Rita and I had fun.

Staying on the big boat tonight, as first lift starts at 7am.

Posted by Sailing Vessel Still Time at 10:28 PM No comments:

I skipped the last singlehanded race to get my mast cleaned up.
Dave Irons/Rodgers helped me move it over to the racks.

We all attended the haulout meeting at the club.
This year I will be driving a tow boat.

Tasks to complete before haulout on the CS34:

Also going to remove the carpet off the pads and replace with rigid styrofoam.
Have to get the dingy out the water, cleaned up, folded up, and put in its bag.
Will probably do this after haulout.
I am going to sail the C22 one more time tomorrow before taking down the mast on Friday night.
Only 198 days until Launch in 2013!
Posted by Sailing Vessel Still Time at 11:30 PM No comments:

Took the afternoon off work to take my mast down with Walter Pingle.
I was planning on doing it last in the week, but the weather and winds are forecast to be nasty all week.

Took the sails off and the boom
Flaked the genoa and put in car to take home.
Took the battens out of the main and rolled it and stored it below.

Did a pump out before heading the mast crane.
Walter and Roger Ryan helped out.

Took the windex, wind instrument, and VHF antenna off.

Mast is on the lawn to get the spreaders off and lines cleaned up before moving it to the mast racks.

Posted by Sailing Vessel Still Time at 7:00 PM No comments:

Winds were forecast for 15 knots with gusts over 20 from the west.
Spent some time on the dock putting in a double reef and hanking on the #3 jib (110%).
Singlehanded.

Got out past the breakwall, and was overwelmed with just this amount of sail.  Had to feather the tiller to luff up into the wind to keep the boat on its feet.  Did not really have any weather helm, as the main was eased to dump air.  Should have switched to the storm jib (75%), but there was NO WAY I was going on deck to change the head sail.

There were 6 boats out, and Beserk was registering 26 knots constant with gusts in the high 30s.
We decided to abandon the races.

Too bad, really had the boat going.  On the way back in I was doing over 8 knots of speed on a beam reach, with max speed of 11.3 knots.  That is the fastest I have EVER had Still Time go!

Got out on the water at 5pm.
Winds were 12 knots from the SE at the start.
Full main and light #1.
Course was shortened 7 short (triangle).

Four boats:
Had a decent start, winds were puffing to 15 knots, almost rounding up.
About half way to the first mark, the wind completely died.
GPS was measuring 0.0 knots, no steerage, sails FLAPPING in the 2ft lumps.
Windex was doing circles!

There was a CS36 coming out of the harbour under full sail just cooking along, so I pointed the boat to get to the wind line as soon as possible.  I left Gruntled and Iris behind and chased Cheeky Monkey to the windward mark.  Wind had dropped down to the 5 to 6 knot range from the east.

Finished right with Gruntled about 3 mintues behind Cheeky Monkey.
Probably good for a 2nd place finish on corrected time.

Posted by Sailing Vessel Still Time at 10:43 PM No comments:

Last weekend, the club did a rough placement of the cradles.

Today I put the labels on the big boat's cradle, and re-labeled the little boat's cradle with a black sharpie.
﻿

Posted by Sailing Vessel Still Time at 5:56 PM No comments:

In June I picked up a used autohelm for $60 off of Kijiji.
I took a chance thinking even it it doesn't work, it would be good for spare parts.
A new unit is over $500.

I hooked it up to 12v, and the display lights up, but the ram would not move.

I opened up the unit and discovered that the stepper motor is rusted and siezed:

Will probably Frankenstein the two units together
Posted by Sailing Vessel Still Time at 5:52 PM No comments: