Afternoon Sail in Sidney BC

Rita's brother in law Hans and I went out for an afternoon sail on their 1995 Beneteau First 375.
It was a beautiful sunny afternoon with winds 10-15 knots.

After a short trip to the beer store, we left the Sidney North Saanich Yacht Club. 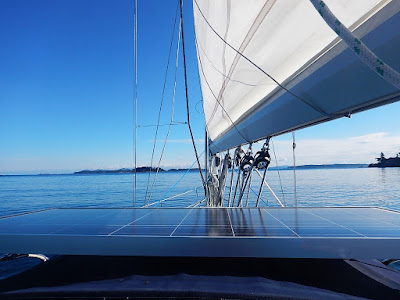 We got the boat going between 4 and 5 kntos with full main and 135% genoa.

Coming back from the weekend's "Round the County" race was Westerly a Santa Cruz 70 with a four spreader mast:
We also saw an Olson 30 coming in; BOTH were motoring.

In the distance, we saw a car carrier coming at us at 20 knots: 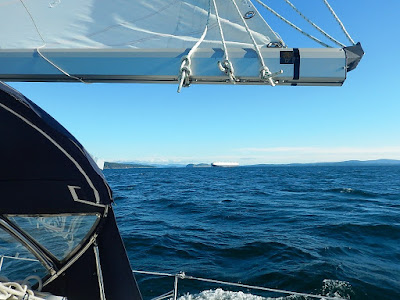 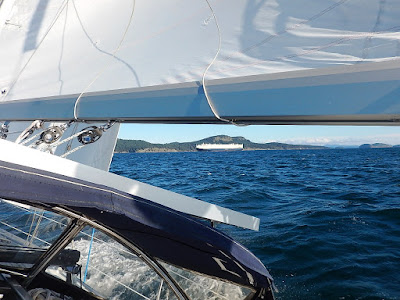 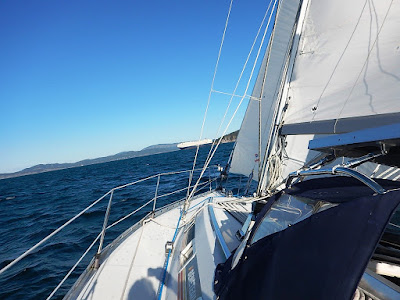 Winds were picking up to 20+ knots, we could have put a reef in but I twisted the main to spill air off the top to keep the boat in its feet.  We got the boat going between 7 and 8 knots. 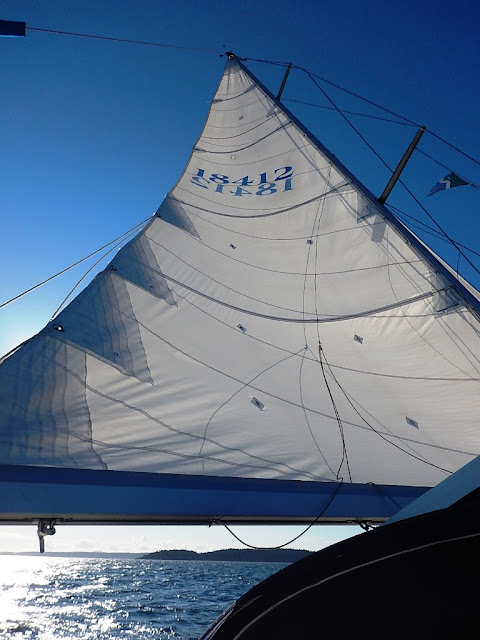 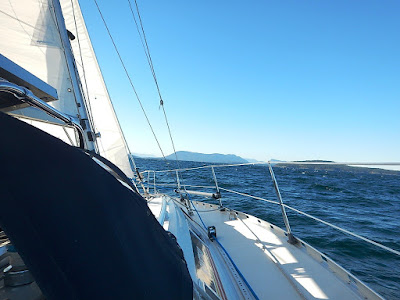 Hans' Shaddow Rose has a nice setup for the round battens: 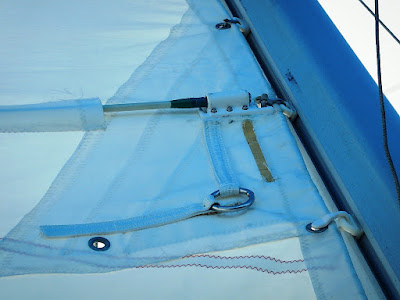 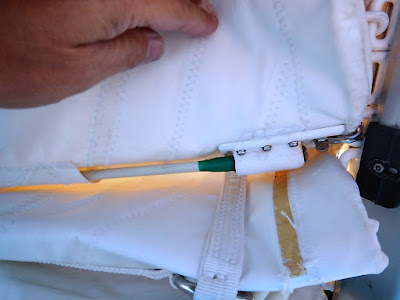 I have the same battens on Still Time, and they have been giving me troubles every year.  Durk from Nova Scotia was going to replace these round battens with traditional flat ones.  I will get him to look at these insead.

The winds died coming into the harbour, so we dropped the main: 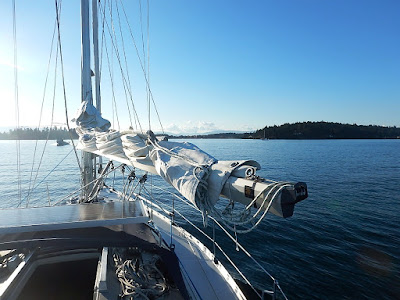 A crabbing boat was coming out in the sunshine: 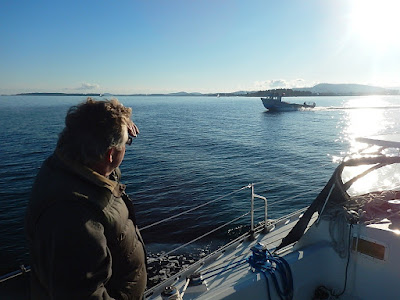 We got the boat away and enjoyed a Black Russian. 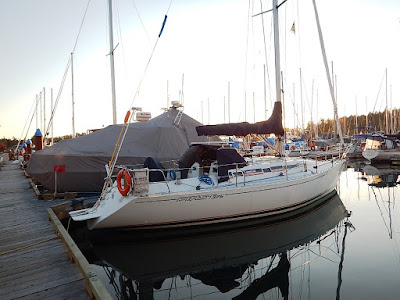 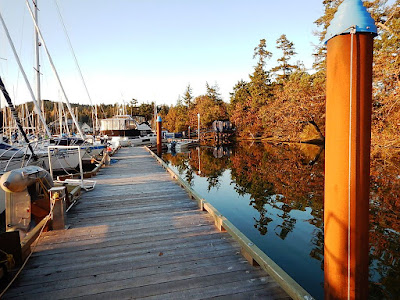 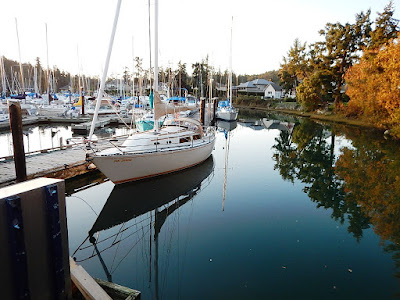 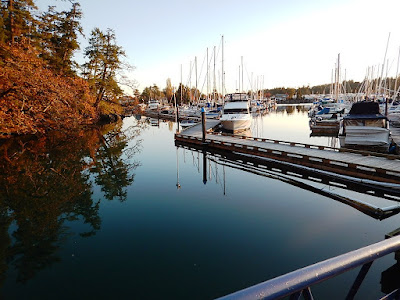 Sunday was the first day we could get on the water.

We were going to go out crab fishing, set some traps out in the morning, and get them in the afternoon.  However, there was a problem with the boiler at the green houses, so Hans couldn't get away.

We headed out in the early afternoon in a small 16 ft power boat with a 90hp motor on the back:

Hans/Debbie friends have purchased a cottage in Musgrave Harbour on Saltspring Island, so we want to goto there to check it out, along with some other ones for sale.

We put the power boat in at a boat launch on an Indian Reserve ($10), and were blasting up the Saanich Inlet at 30 knots.

Musgrave harbour is a private community with their own docks and lots/houses all around.


How kewl would be be to have a cottage facing the harbour: 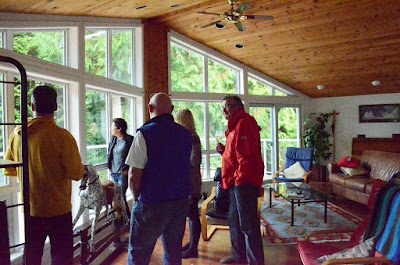 ...and have your boat moored in the harbour? 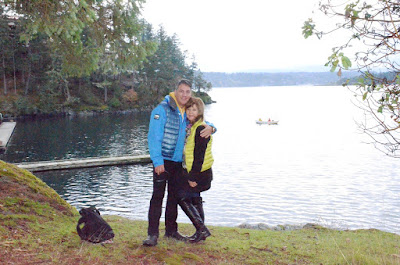 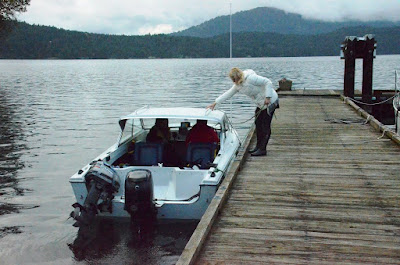 We came upon a group of Sea Lions: 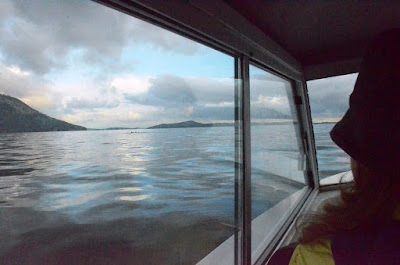 It was a fun excursion.

YYZ to YYJ via YVR and Tsawwassen Ferry

Rita and I booked a week's vacation to visit her sister Debbie and husband Hans in Victoria BC.

We got to Toronto Pearson (YYZ) two and half hours before our flight, and decided to have dinner at the Keg right near the airport, leaving the Keg at 6:30 to catch the flight.  Don't want to get in the details, but we missed our flight.  We had to re-book on a red eye to Vancouver (YVR) arriving at 5am Toronto time.

We took a cab to a hotel near the Tsawwassen Ferry. 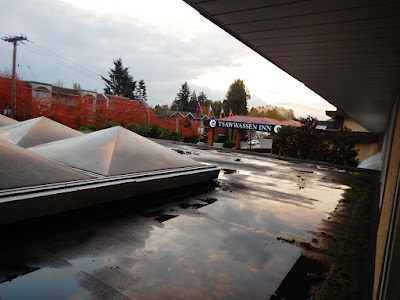 The hotel was clean and relatively cheap at $135, and was a short cab ride to get on the 9:00am ferry.

Actually, it was fun ride!  Next time we go, we will fly into Vanvouver, and do some exploring and visit my cousin Annika.  There are TONS of flights to Vancouver, and lots of seat sales.


Going through Active Pass in a sailboat can be a challenge with the tides.

In this picture, you can see the tides pushing against us: 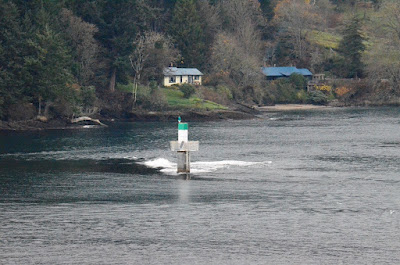 It was kewl going through Active Pass and into the terminal at Schwartz Bay where Hans and Debbie picked us up.

16 HOURS TO GET TO VANCOUVER ISLAND

Rita and I are heading the BC next week, so I wanted to get the winter frame and cover on the before we left.  Could not get it done yesterday because of ACE.

Got to the club around 10am, and started getting the frame pieces together.
Took a while because a couple of the connector pieces were broken, and I had to replace them.  The ends of the ribs needed their rubbers replaced so that would not dig into the gelcoat.

Took several hours to get it together.  My neighbour Dave helped me put the back part of the frame up (took about 10 minutes), then I spent another hour getting the rest up.

The canvas cover comes in three sections, so I was able to single handedly  put it on. 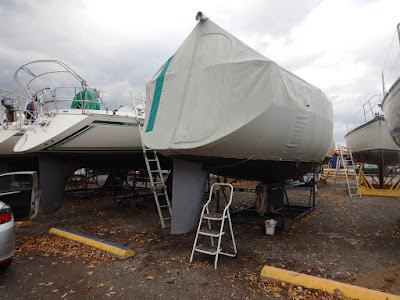 This year I cut up a pool noodle and duck taped it to the stantions to prevent them poking through the cover in the wind.


Removed the stern perch seats, and removed all the liquid cleaning products to take home (don't want them to freeze).


Posted by Sailing Vessel Still Time at 9:16 PM No comments: