C22 Final Race of the Summer

Daughter Melissa had to switch an oncall assignment at work to come out.

At the dock, it was blowing 14+ knots with gusts to 20 from the south west all day.
This was on the 34 with the taller mast.  On the 22, only seeing 10 knots.
Very lump sea state, so we want to go out with a #1 genoa for power through the waves.
Melissa would feather/rag the racing main in the gusts

Once we got out there, the boats was being overwelmed and we rounded up a couple of times.

Decided to put a reef in the racing main.
We hove to and Chris and I put it in.


We have never reefed the racing main.
Would have liked more tension on the clew, as the draft of the sail was fairly deep.
However, we needed to get to the start line.

We did have to start the motor to get to the start line with 1 minute to spare.
Course was 4 short.
We came in on port tack and had to duck some starboard boats.
Not a great start, but considering getting out late as we did, not bad.

We were last around the windward mark, but not to far behind our competitors.

The reaching legs were both on the beam, and the wind was definately stronger above our mast, and the larger boats with taller masts pulled away further.

We finished last out of 4 boats in our class, but probably came 2nd or 3rd in corrected time.
Results have not yet been posted.

In the afternoon I used some spreader patch material to repair the hole in the genoa: 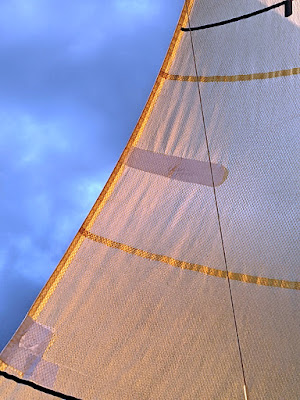 Glad we got out for the last race of the summer. 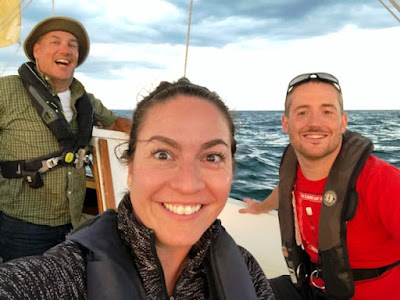 We definately came in 2nd in series 4 behind Bananas.

Another great night on the water!

This season, Frank is the new owner if a Beneteau First 45 called Odyssée.
He asked me to doublehand with him on the medium distance race called the Stonehaven.

Beautiful boat below and above.
Power winches on the cabintop AND the primaries.

We decided against doing a spinnaker or gennaker as it was only two of us.

Frank scurried about the boat trimming the sheets and such.

We tacked to head to the start line, and started powering up, the bowline for the headsail sheet let go, and the leeward sheet came out of the car.  The jib was free flying, so we had to furl the headsail in and correct.  We missed our start my 5 minutes.

We decided to go offshore as there was more breeze (16 knots at times).
The forecast was supposed to swing to the south, so we figured we would be knocked to the mark.
Well that didn't happen until after we got to the mark!
We went wing on wing and were last to the mark near Pickering. 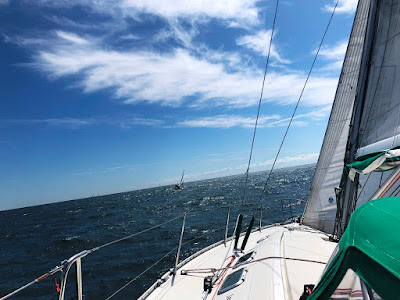 We caught up and passed several boats to the finish, but ran out of room to catch the Capri 30 JustinTime.

Great day on the water.

We have been meaning to take our friends Stephen and Tanya out for sail this summer.  Anytime we setup a date it was either too windy, or too wavy, not the conditions to introduce new sailors to.

Earlier in the week, the forecast was sunny and 10-12 knots of wind from the north, meaning moderate winds and no waves, perfect introduction to sailing.

Went out with a reef in the main, and got the boat clipping along nicely.

I got Stephen to helm the boat for the first bit, then the auto pilot took over.


We anchored off Pickering in 10ft of water and enjoyed some shrimp burgers that Tanya had made.

We hauled up the anchor, but the winds had dropped to less than 5 knots, so we motored to the Ajax Weather Buoy and then home, getting to the dock around 11:30pm.

I think Stephen is hooked on sailing, and will get him out a couple of times more!

C22 Race Night with the Waughs

Race night on the Catalina 22.

Daughter Melissa could not make it.

Chris brought his Dad with him for his first time racing.

Winds were from the SW, 12-15 knots, very wavy sea state.
We went out with racing main and #1 genoa.
We thought about going with a smaller headsail, but we needed the power to get through the waves.
We did move the cars back a couple of positions to flatten the bottom of the sail and spill wind out the top.

Chris on the helm; course was 4 medium.

The race committee had two general recalls because to many people were over early.

We had a great start and beat our competition to the next couple of marks handily.

Bananas (C&C 29) is 7ft longer than us and was catching up with us (as they should!)
On the 2nd upwind leg, we went to tack to cover them, and the genoa got caught on the spreader, ripping a hole in the sail.  Took a bit to get it off.  Bananas got past us in the minute it took to sort it out.

On the final upwind leg on the final tack to the finish, the genoa hung up again on the spreader. 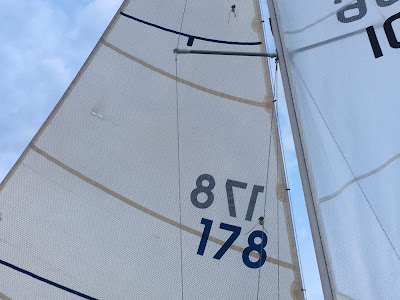 I really should have had spreader patch material in this area.
I have some, and it will be an easy repair.

We finished a little over a minute behind Bananas, but took the race in corrected time:

Peter took the helm after the race, and drove the boat right to the slip; good job!

CS34 Sailing with my Shadow

Been a while, but been busy with house renos and life in general.
I will add more content from the past as I get some time.

Got down to the club in the early afternoon to fix the main halyard.
Last sail, it popped out of clutch because it didn't have a stopper knot on it.
Had to use a tape measure as a tracer to pull the line back from the mast under the cabin deck.

Beautiful sunny, HOT and 15 knots of breeze from the south west.

Decided to go out single handed with my Shadow, our 16 month old Cock-A-Poo.


It was a little choppy with 3 foot waves, but got the boat going nicely with full sail.

Winds were building, and I thought about putting a reef in, but the rail was NOT in the water.

It was a great sail four miles out into the lake on a close reach. 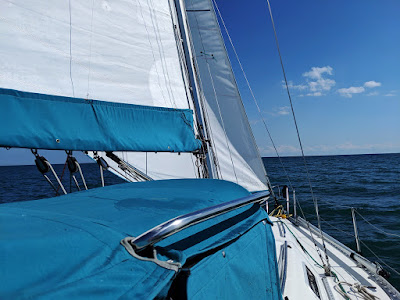 
Posted by Sailing Vessel Still Time at 9:55 AM 1 comment: