Just Chris and I with winds 9-12 knots from the NNW and supposed to build.  We went out with a full main and #2.

Perfect amount of sail, as we would rag the main in the puffs, and sheet in in the lulls.

Course was posted at 2 medium, but just before the start there was a 40 degree wind shift to the north, and the course was changed to 1 medium.

Decent start on starboard tack, but were in danger of rounding up into the committee boat.

We sailed a good race, but just can't keep up with the Sharks in heavy air.


Chris did a great job on the helm. 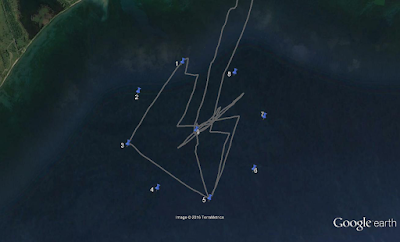 In the spring, the club was approached to do some on water activities with veterans on the British frigate HMS Ajax.  We jumped at the opportunity!

The town of Ajax was named after HMS Ajax ships with many of its streets named after sailors from the Royal Navy.

We had approximately 25 sailors and family who came from the UK.

We took them out on three power boats to take them on a tour of Oshawa harbour where the frigate visited 40 years ago in 1976. 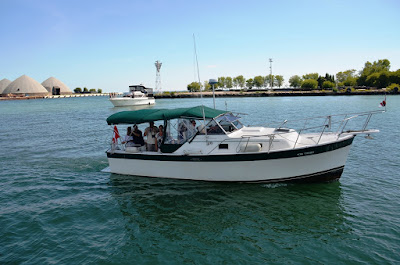 In the background above you can see COMRA; this is the place that HMS Ajax docked 40 years ago.

The wreath of fresh flowers with ribbon "HMS Ajax" was cast into the water in rememberance of all the sailors who have served on the frigate.

We had a great dinner in the clubhouse afterwards.
Here some more photos from the day:


It was great to be part of the celebration.

CS34 Pickering with the Smiths

Our sailing friend Peter has his parents visiting from Scotland for a couple of weeks, so decided to go out sailing for the evening with them.

I have met Peter's parents Andy and Alison many times, and was glad to have them out with us.
We also had Peter's daughters Rowan and Lola come out too.

We picked up some kabobs from the Metro, loaded up the boat and headed out hoisting the main in the channel.

Winds were 9-10 knots from the North, so flat water, got the boat going 6.5 knots on a close reach towards Pickering.


I  thought The Smiths were a rock group from the 80s!

We dropped the sails and anchored in 11 ft of water between Pickering and Ajax.  BBQed the kabobs and had a wonderful dinner.

We blew up a stand up paddle board.


Toward 9pm, we hoisted the anchor, and headed east.

The winds had died completely, so it was a motor home.

Twas a great night on the water.

Spent the morning provisioning the boat for our trip east.

I had Melissa's engagement party that night, so I set out singlehanded, and Rita would meet me in Cobourg for the party.

Winds were 11-15 knots from the NW, perfect for a delivery to Cobourg.

Shortly after getting out the channel, I got the spinnaker up and was sailing along under autopilot between 7 and 8 knots. 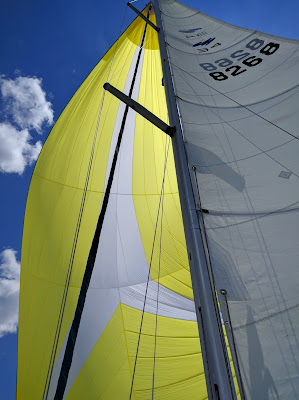 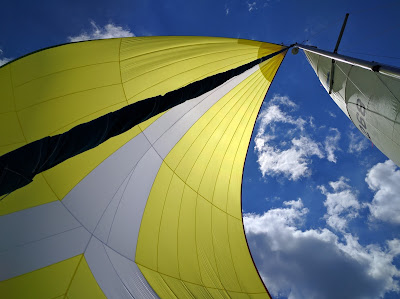 Things went along well until past Newcastle and the winds started to die.  Needed to get there and keep my speed over 6 knots knots so on with the motor.  After a while, the wind generated by the forward motion of the boat was more than the speed of the wind, so I doused the spinnaker and motor sailed to near Port Hope. 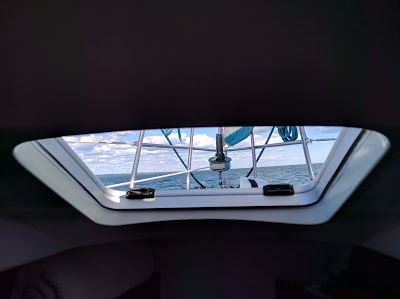 The wind was in transition from NW to NE.

Was able to unfurl the jib and sail at over 6 knots into Cobourg.  Arrived at 17:43.


Rita drove out to Cobourg, and after a shower, we headed to the party.

I have not been updating my blog from after LYRA, so I am going to try an do one update every day for the next little bit.

Rita had three weeks off after LYRA and we were planning on leaving right away to cruise the 1,000 Islands.  I had a lot to do on Still Time to get her ready.

Besides, my daughter Melissa had her engagement party at James' parents place on Sat Aug 6.

I needed to fixed the reefing lines on the main.

When rigging the 34 at the start of the season, I had lost one of the single line reefing lines in the mast (don't ask).  I could see the line about 4 ft from the end of the boom, but could not get it.  I drilled the rivets out of the boom end casting and could not get it.

I finally had to take the main off, the stackpack, lines, vang, and remove the boom.  It was much easier with the boom on a picnic table.

Also discovered that the blue 2nd reef line was wrapped several times around the outhaul.  This was why the 2nd reef had always given me trouble.  Lots of friction putting it in, and it would jam shaking it out.

I had to borrow a heavy duty rivet gun from Dave Sandford to re-attach the boom end fitting:


This was almost three days of effort to get fixed.

I also wanted to fix the shower.

The handheld shower hose broke 3 seasons ago, and you could not remove the fixture because of clearance issues behind the fiberglass in the shower stall: I managed to disconnect the hot/cold water fittings behind: 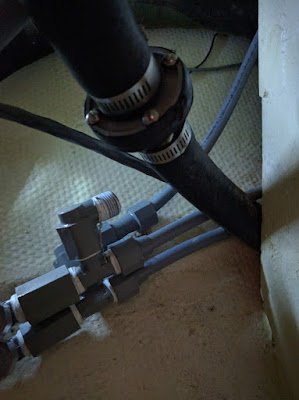 ...but could NOT get the connectors thru the hole in the shower stall.  I ended cutting them out, and buying 2ft long braided flexible stainless with adapters; just like what you would see on your toiler or under your bathroom vanity.

Took several days of frustration to get this done.

After the fact, I can tell you that we used the shower a LOT on our cruise.  Nothing better than having a shower onboard when at anchor for a couple of days.  We also used the shower on Bogart, as we were paranoid about him picking up a tick from walking him on some of the islands.