Both Melissa and John could not make it.

I had lined up a couple of adult dinghy sailing school students to come out, but no one showed up.

Rita and I headed out together with a full main and #1 genoa.

Little to no wind.

Ocne we got to the race course, I went below in the cabin, and many of the racers thought that Rita was out single handing!

Race Committee postponed for half an hour, and abandoned the race.


GPS was not not working, so no track.

Looking forward to competing in the Lake Ontario 300 this weekend.

The race is 300 nautical miles, starts on Saturday morning, and will take 3 days to complete

Be sure to follow our progress on the Yellow Brick race tracker.

Posted by Sailing Vessel Still Time at 12:11 PM No comments:

John could not make it, so I again recruited Tina to sail with Melissa and I.

Forecast was from 12-16 knots from the SW.  Melissa and I discussed what sails to put up and in the end we decided on the full racing main and the #2 genoa.  Once out on the water, we determined that this was a great combination because we needed the sail area to punch through the waves.

We turned the motor off and sailed to the start line, but found we could only make 3 knots into the waves from the SW.  The first start warning signals had started and the GPS said that we were 12 minutes from the start, so I got the motor going again so we could get there.  Turned the motor off when our start sequence was going, and we were still going to be late by a couple of minutes!

Our start happened and 5 boats were over early, so the race committee did a general recall.  We all cheered; I have never been happy when a general recall happens, but we were elated, and nailed the next start on  port tack on the pin end.

On a starboard tack, we had to pound into the waves, so we cracked off the sheets slightly for more power.

Winds did lighten, so we were glad on our sail selection.

There was definately more wind offshore, but also more waves.

We finished just behind Fly Buoy who crossed us on starboard tack at the finish line.
We finished fourth on corrected time.

I did NOT get another amazing sunset shot.

Melissa was on vacation, and John came out for the first time this year.  Also picked up a co-worker of Chris Mace named Tina who wanted to come out racing.

Winds were forecast for 6-8 from the SW.
Full main and #1 genoa.

John on the helm, me and Tina on the sheets.

On the race course, we had 6-8 knots be from the SE, so the race committee set the course to 6 short.

We were well below the boats in the first start at the start line, we headed away on a beam reach at close to 5 knots. After a couple of minutes we tacked to time the approach to our start.  WELL, didn't the wind completely die and shift 90 degrees, Would could only muster 2 kntos of boat speed close hauled and were 6 minutes late to start!  I could just hear Melissa say that we should be closer to the start line if she was out!

On the 3rd leg, the winds were nothing, and we spent some time with no boat speed.
We reached out to get some wind before the leward mark, as we saw all the other boats parked at the mark.

Tina leaned was a DFL was. 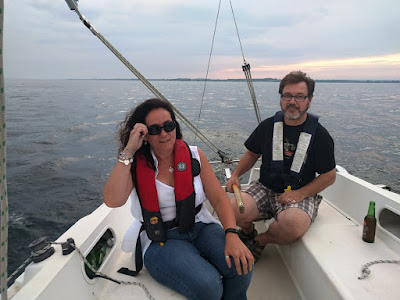 We ended up finishing 8th!

Still good enough for a 3rd place flag for series 2!