Winds were forecasted for 9-14 from the North; flat water.

Too much wind for the racing main, so I rigged the old darcron main with a double reef at the dock and went out with the #2.

Last week I gave the rest of my gas to Brian on Fly Buoy, so I ran out of gas going out the channel.  No big deal, as with the north wind behind, I just hoisted the genoa and sailed out to the course.  Once at the start, I hove to and Andrew lent me his extra gas can.  Andrew came in with speed and Mickey's hull was the beneficiary of a racing stripe from Still Time's rub rail.

Course was set to 1 medium.  Had the right amount of sail, the boat was never over powered.

In a nutshell, I SHIT THE BED in the race.

Tacking at the start, autohelm messed up and I did a 360.

Was doing well to the windward mark, but had to tack trice to make it.  On both tacks, the autohelm messed up and I ended up doing more 360s.  Plus the lazy sheet got stuck in the genoa tracks.

Here is a graphic of the shit show at the windward mark: 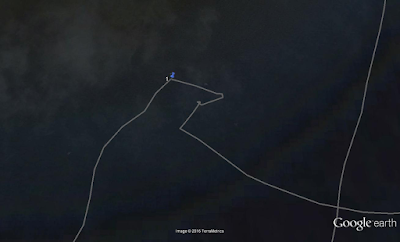 Ended up last a full 20 mintues behind the others.

Was still a nice night on the water!

Well we did it.  Michael A, Bart, Peter Earle and I hauled out Ace this morning.  We stripped her hull of all the red MicronX and put on a nice thick coat of VC17.  This has been  on the list of things to do for a long time.

We found one interesting thing when we stripped the hull.  I’ve included a photo of a large repair at the waterline on the port side. It looks like Ace had a major incident at some point in her past. 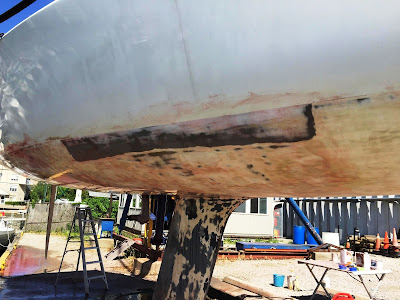 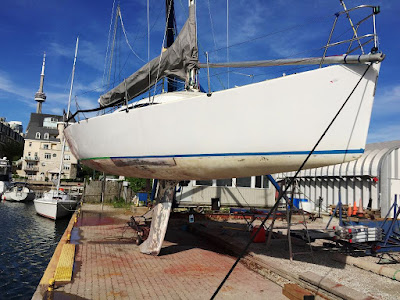 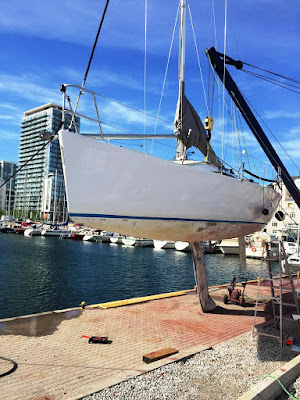 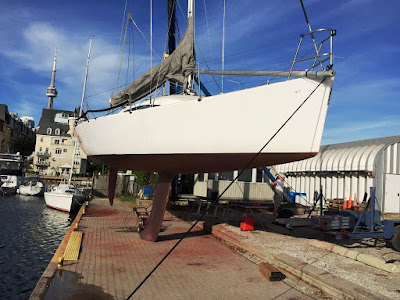 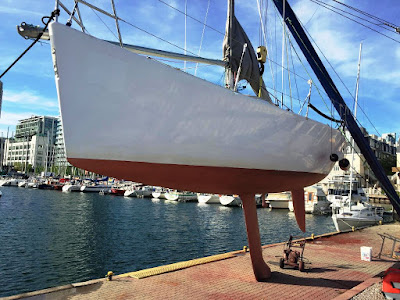 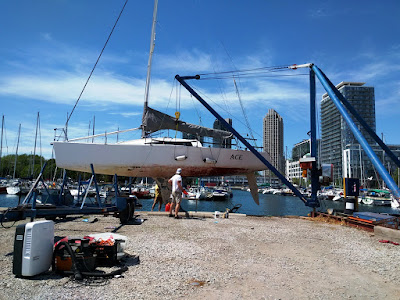 Posted by Sailing Vessel Still Time at 10:00 PM No comments:

Sunny and 26 degrees which means only one thing: not much wind!
Hard to believe it is May.

John was tied up at work, so it was Melissa, Chris, and I.
Full main and #1 genoa.

We had a postponement to wait for some wind to fill in.

The race committee did a radio tribute to long time WYC racer Andrew Sensicle who passed away this week.  We observed a moment of silence in his honour.  Tanker Jones flew the RC flag at half mast: 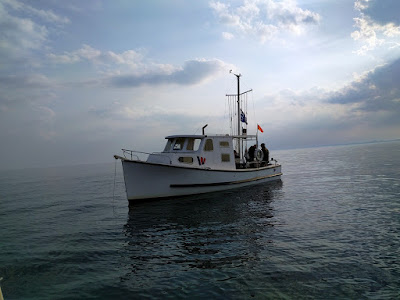 ...and fittingly Andrew's son John skippered Berserk and sailed past us with the flag of England on the backstay: 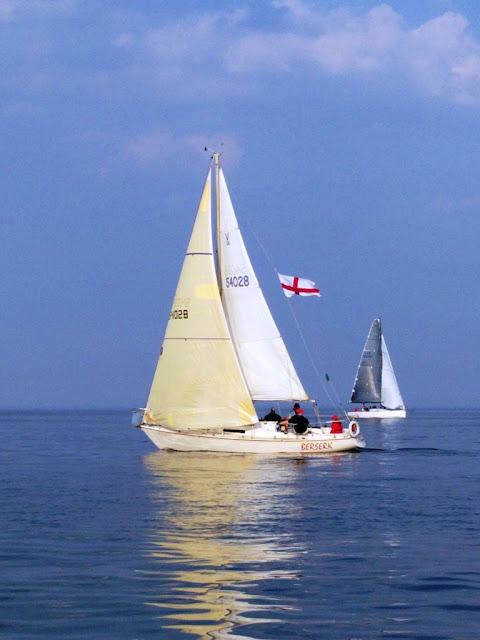 After about 5 minutes, the wind did come in and the course was posted as 7 short.

At our start, we had boats all around us, and Marauder (Kirby 25) pushed us over the line, so we had to turn and restart.  Good experience for Melissa on the helm; a year ago she would have been panicking in the traffic. Everyone was running the line, so we could not see the pin.

We did alright despite having to go back and restart.  We were right in the pack of Sharks.

On a reaching leg we tried to go above Mickey because we had some speed with the genoa pole out to leeward.  Andrew on Mickey would not allow it; another good lesson for Melissa on the helm.

Yellow circle is where we tried to overtake Mickey, and YES were were over the line early.

Fly Buoy (T-Bird) had a great race and was finished and in the bar before we even got to the dock.

We finished third across the line and third in corrected time. 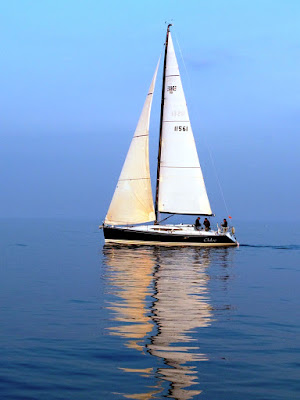 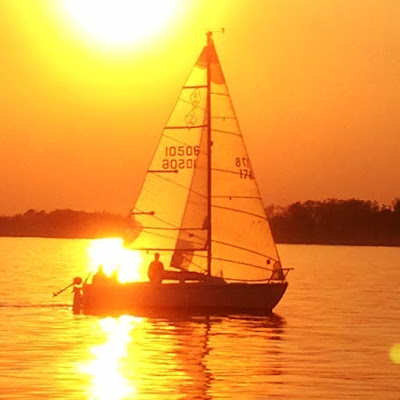 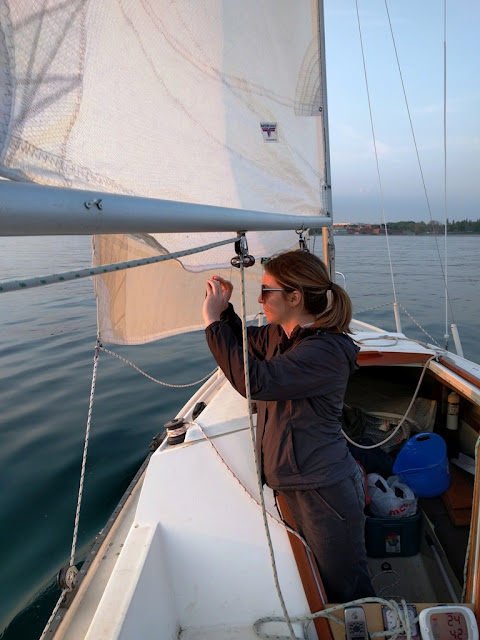 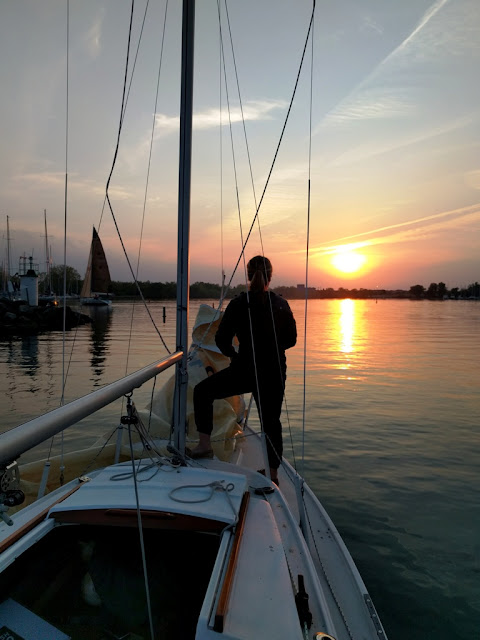 Another great night on the water. 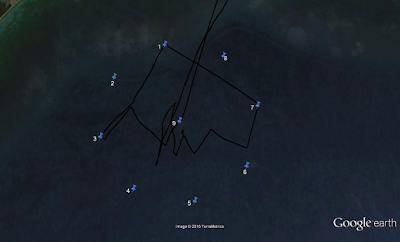 Winds were forecast for 4-6 knots from the SW, so I rigged with the racing main and #2 genoa.  The #1 is too much to handle single handed.

Before I went out, I re-terminated the electrical connections for the autohelm.

Four boats (three Sharks) and the course was set to 5 short.

Was a bob around mark 9, but the wind was filling in from the south.
Start was terrible, as I was on the wrong side of mark 9.

The Sharks hunted for wind on starboard, away from the windard mark, so I went on port towards it, and got the wind first, switched to starboard and was lifted right to the mark.


Poled out the genoa to windward.


Note the autohelm is both pictures; it still loses it mind sometimes, but at least it was not losing power!

Forget PHRF handicaps when you can win boat on boat.

Pulled in on the end of dock 6 and Peter helped me put the sails away. 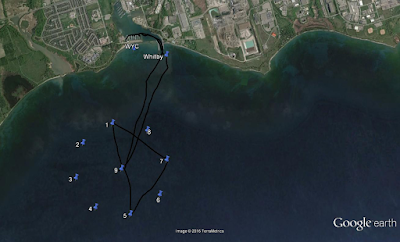 First Wednesday night race and the forecast was calling for 2-4 knots of breeze and dropping.

John injured his knee in hockey so it was Melissa, Chris, and I.

We had 20+ boats out including some new ones: 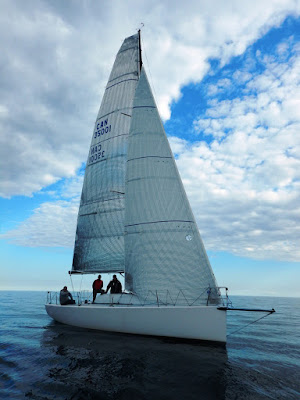 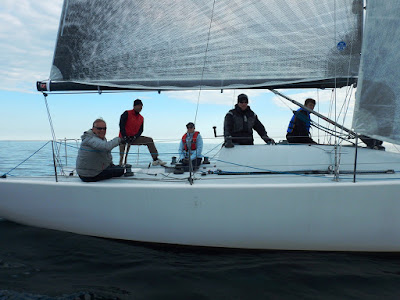 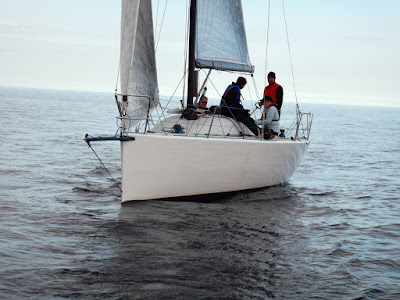 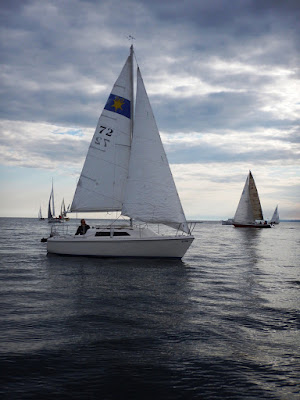 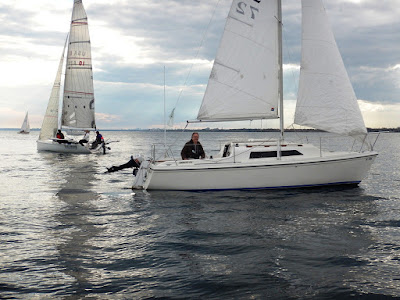 Some other random shots:


Here is a picture of Peter meaning business on the bow of Razorbill: 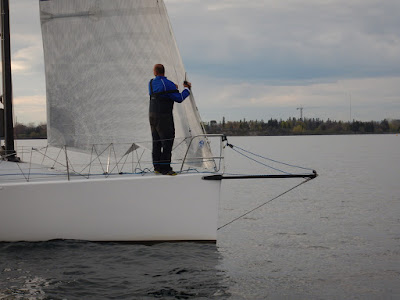 ...and here is a picture of Chris DOING business on the bow of Still Time: 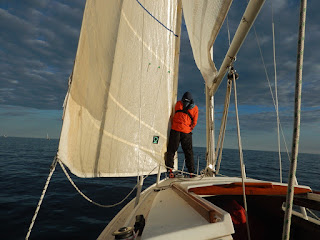 There wasn't much wind at the normal start time of 6:30, plus it was shifting all over the place making it difficult for the race committee to set a line.  They won't start a race until there is a sustained 3 knots of wind.  We finally got the race off a little before 7pm; course was 3 short.

We had a decent start and took a flyer towards land hoping to pickup some shore breeze and get lifted to the first mark.  Well, the wind was dying completely, and we had just sailed away from the race course.  Looking a the track, we should have tacked eariler towards the mark.

Winds dropped to nothing, and our entire division floundered on a broad reach to the next mark.  After an hour, we determined that we could not finish the race in time to get back to the bar.

Besides, it was cold on the water.

Estimate, as I left my GPS on for the ride home in the car.

First singlehanded race of the season.

I spent some time before the race retrofitting a new Simrad autopilot.
I have not be able to fabricate a tiller pilot extension tube so that it would fit, so I fashioned a 2x3 that spanned the cockpit near the stern to hold the autopilot in place.

Getting out on the water, the new unit worked fine, but was useless because it kept falling out of the 2x3.

Got out my old autohelms and quickly realized why I bought the new one.  The first one would not keep a course at all!  The second one has a wiring problem and keeps shutting off.

Twas a frustrating start trying to get it working.  I did fine once I abandoned using the autohelm.


Winds were patchy and all over the place, the lead changed several times.

In the end we all finished within 3 minutes of each other with Bob on Firebird II coming from behind on the last leg to be first across the line.  Since I have the highest handicap, pretty sure I won on corrected time.

Bob on Foxtrot ran out of gas coming in the channel and had to be towed by Cheeky Monkey: 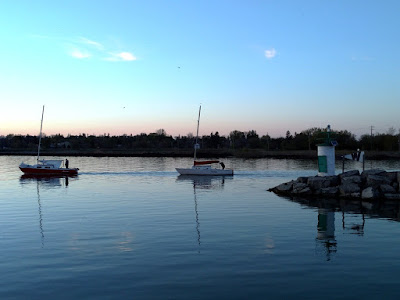 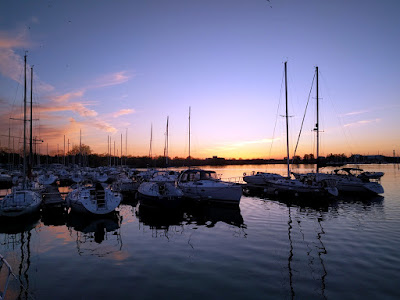 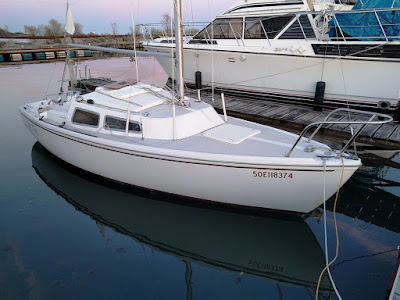 Great night on the water! 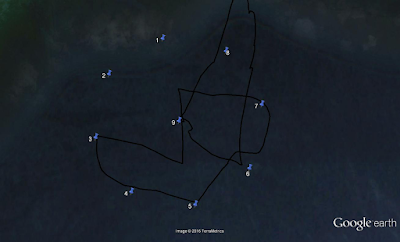 I spent the afternoon getting the mast ready to be put up.
Got the sails and cushions moved moved over from the sailing school portable.
Moved the boat over to the basin where Peter and Jenny helped me raise it at the dock.

We had a mishap in that we severed the wind instrument wire.
Oh well, will have to drop the mast to repair.

Peter and I rigged the boat and tuned the rig.

The new traveller and halyard lines are nice.

John could not make it, so Peter went out with Melissa, Chris, and I.

14 boats on the water including 6 boats from our division.  Four Sharks, included Great White from the sailing school.


We had a great start on starboard tack in clear air.  Melissa decided to take this lane well south of the windward mark.  Payed off because we got lifted to the mark and beat everyone in our division to it.

The next two reaching legs, the Shark passed us by a little.  On the final upwind leg we tacked right away and repeated what worked well for us at the start.  We finished just behind the Sharks which means we would have beaten them on corrected time if this was a regular race. 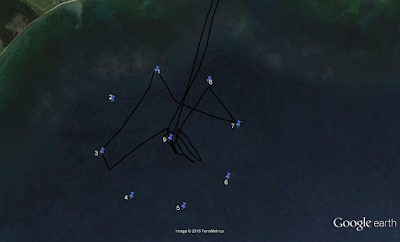