The Whitby 100 was postponed due to major weather system coming through.

Instead of starting at 7pm on Friday, they delayed it until 10am on Saturday morning.
The problem was that many of the boats could not get crew past Sat night.
We were down to 5 crew from 8.
All our competition withdrew, so so did we.

So Zamboni was in Whitby for the regular Wed Frostbite race.


Forecast was for 7-8 knots from the east.
We went out with a conservative #2 headsail.
Turns out to be the perfect sail combination for the wind conditions.

Course was 7 short.
The 2nd/3rd legs of the triangle were beam reaches, so we didn't fly a chute.
The 5th leg was dead downwind, so we did fly the "big blue" chute.

Chris did great on the helm. 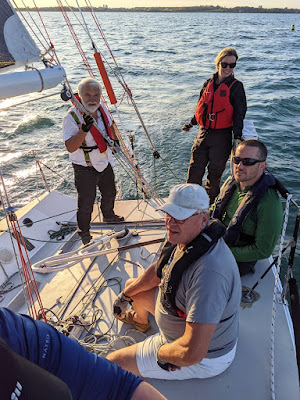 September sails are the greatest! 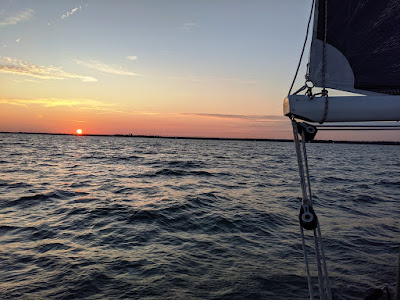 I left my GPS at home, so not track or stats.


Walter brought some Honey Crisp apples he picked an hour before coming to the boat.

MUMM36 Delivery from NYC to WYC

Zamboni is going to do the Whitby 100 race this coming weeked.

I had planned to do the delivery on Thursday, but the wind was going to be on the nose 12-14 knots with 3 foot waves.  Wednesday afternoon looked better, 7-9 knots from the NW, so a comfortable spin ride to Whitby, switching to the south around dinner time.

Dave and I took the GO train from Whitby and met the rest at the boat.

Because we left later, the winds had already swung around to the south.
We went outside Toronto Island, and tried to hoist the symmetrical "Frankenchute".
However, there was a twist the spinnaker (bad packing) and we to partially douse it to get it out.
Winds were from the south and 12+ knots.

We were too close to the wind, and the boat healed over.
We ended up losing the remaining masthead halyard.

In restrospect, we should have hoisted a headsail and wait until we got around the Leslie Spit before dousing to a spinnaker.

Once past the spit, we did hoist the fractional Evolution spin and sailed comfortably for a while.
Winds were dropping, so we did an outside hoist of the larger "Big Blue" and doused Evolution.

After a while the winds completely died, so we doused the spin and motor sailed for about 10 miles.

About 5 miles from Whitby, the winds started up again from the North about 10 knots, so we killed the motor and sailed with a full main and #2.

We got into the dock at 8pm.

For some reason, I didn't save the GPS track.

Raceboat Zamboni has not been sailed a lot this year.
Besides the Susan Hood and Lake Ontario 300, we did not do any other regattas.
The AHMEN series of fall races are put on by several of the Toronto based clubs.
There were about 30 boats out on this day.

We had a full crew:

We got out just after 10am for the 11:30am start.
The distance to the course off Mimico was just over 3 miles.

We took the time to hoist and douse a couple of our spinnakers.
Masthead symmetrical "Frankenchute" and masthead A2 "Tiffany". 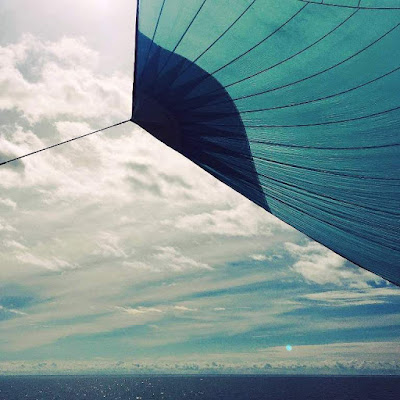 We were the 5th start, and got off well down the line near the pin on starboard.


The course was a figure 8 around Humber Bay.
On the leg toward Toronto, we were the southernmost boat.
The wind just shut off about half a mile to the mark, compressing the fleet to the mark.


Wind filled in from the North, so we were the last to get the breeze.
Boats only 100 yards north of us were cooking along, while we were parked. 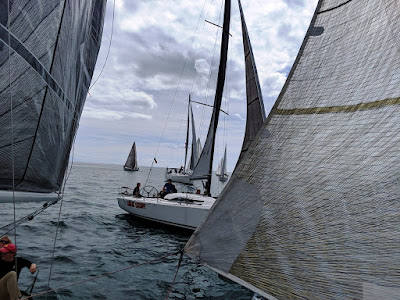 We picked up our flag for winning the Susan Hood Trophy Race:

Let me start with what a disaster!


Melissa and Chris came out.
Winds were 12-20 knots from the northwest, so we rigged reefed racing main and #2.
Chris on the helm.
Course was 2 medium.

Getting out of our slip, the wind was blowing 20+ knots from the NW and it blew us into some weeds that trapped our rubber.  The fact that we had the main half way up was a contributing factor.
We had to motor into another empty slip to the west to get control of the boat to head out.

Frostbite series runs for Sept with all boats doing a triangle course.
Out competition in white sail was Silver Shadow and Sandpiper.
Rabbit start which was confusing for EVERYONE, but we got a race in. 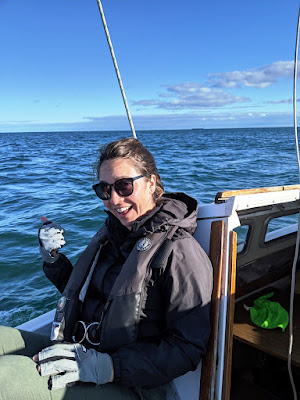 We were last to the windward mark, but not too far behind out competition.

On the 2nd windward leg, we went to tack to the mark, and the #2 headsail hung up on the spreader and ripped it MAJORLY.


We went bareheaded and swapped the the #1 as the winds were lightening.

Heading to the next leeward mark, we went to the wrong mark!
So we turned this leg from a 0.5 mile downwind to an almost 1 mile reach/reach.

Rounding the correct mark #8, we went to power up and the mainsheet let go.
I had re-rigged the mainsheet putting in the reef and didn't tie a proper stopper knot.
SHITTY STOPPER KNOT
Took a couple minutes to re-run the sheet through the blocks.

Tacking the finish line, John Scurr on Viking was finished the race and coming over to see if we wented to get in another one.  However, he was in out path and we were on starboard tack!

It was still a nice night on the water, despite the DFL! 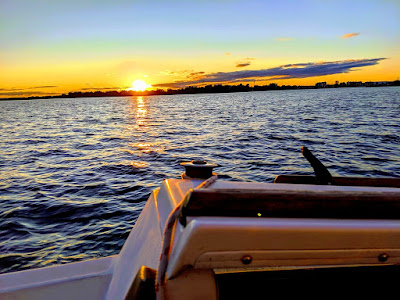