C22 Blast from the Past

After having my sailboat and sailing adventures on a private board last year,
I have decided to use Blogspot to make it more accessible.

I am now a member of the Whitby Yacht Club.

Just last week, I was cleaning up some bins I removed from the boat and came across: 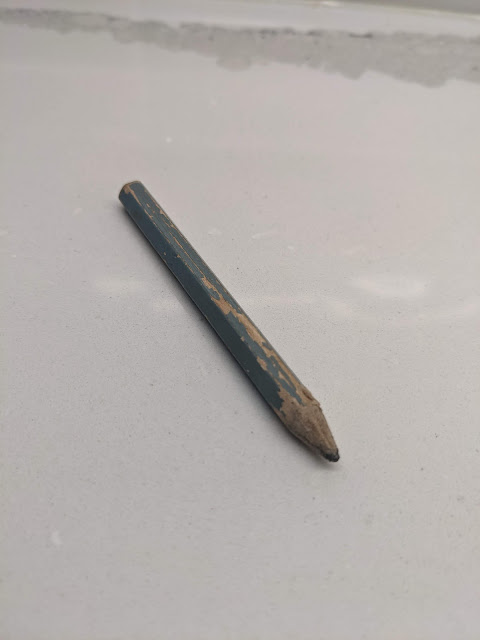 This is no ordinary golf pencil; it has a story!

Unfortunately the private board from 2010 is no longer around.

So it was late October 2010 at Newcastle Yacht Club.  Most of the boats in the marina were hauled out, and I decided I wanted to go for one more sail.

I had had Still Time for two seasons, and was learning and working out the bugs of the boat.  One of the problems was that the jib tracks leaked when sailed hard, or during rain.  Water would leak down into the molded fiberglass liner that makes up the seats/bunks inside.  So before going sailing, I would always bail out the compartments with a bailor and/or sponge.

I decided I would drill a small hole in the inner liner of the port dinette seat.  The water drained into the bilge, and the bilge pump looked after it.  So I decided to do the same of the starboard side, drilling another 1/4" hole.

Well on the starboard side, I was NOT drilling into the liner, BUT INTO THE HULL!
Removing the drill, I had a 18" high geyser in the cabin!

The boat was now sinking!

There was nobody in the marina to ask for help.

I held my finger over the hole like a Dutch boy on a dyke, and scrambled to find something to plug the hole.   Luckily I found this golf pencil, pounded it into the hole, and went out for a sail!

It was an easy fiberglass fix after being hauled out the next day.