I got down to the boat again at 3pm to avoid traffic. 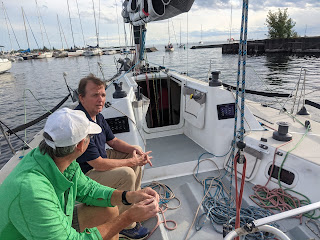 While raising the mainsail, we saw Tabasco coming out of the harbour:
Our engine sounded normal, but tons of white smoke was coming from the exhaust: 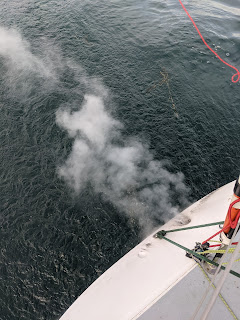 If picture is worth 1000 words, what is a video?
We noticed that there wasn't much cooling water coming out the back (just a trickle).  Shortly after this, the engine overheat alarm came on.  We quickly shut the motor off and sailed to the start line. 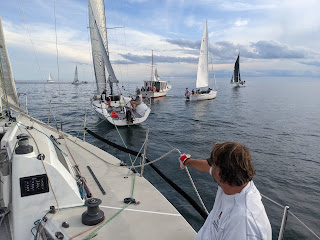 The start was delay due to no wind: 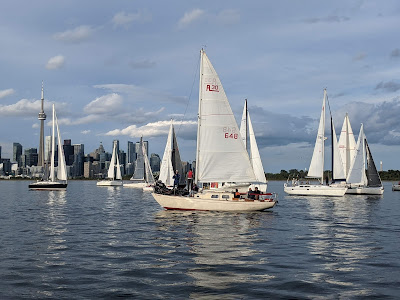 After about 15mins, the wind filled in with 5-6 knots of breeze. 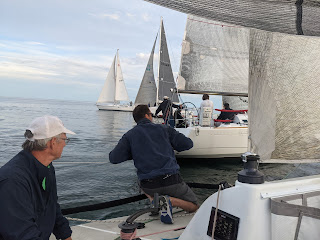 It was good to be course racing again after a 2 year Covid break.
Saw a Catalina 22 Capri racing: 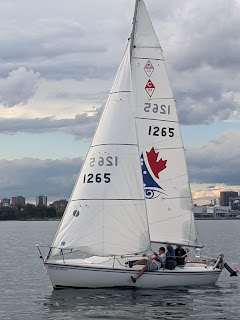 The race was shortened to only one loop of the windward-leeward course.
The wind shifted so both legs were more of less upwind (no spinnakers).
We finished 2nd to the well sailed Beneteau 36.7 Zingara: 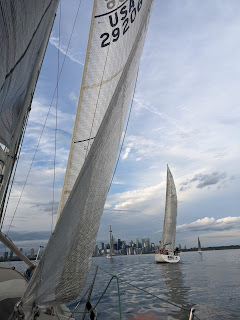 After the race, Phil and I got the engine cowling off and found that the raw water strainer was mainly plugged with weeds.  Shut the seacock and Phil cleaned it out on deck.  Got it back in and we had full flow of water out the exhaust and no more smoke!
Another lesson learned: check the strainer a couple of times in the summer, especially after the boat has sat for a while.  The smoke was actually water vapour caused by a restricted raw water intake flow.  The little bit of water coming past the strainer was vapourising on the hot engine and not really cooling it properly.  We will definately check the impeller at haulout.

This picture of us was posted on the National Yacht Club Facebook page:
This was the beer we had in the cooler:
I just gotta have more cowbell
Trip Start: 05:16pm
Trip End: 07:33pm
Trip Duration: 02:17
Trip Length: 6.0 miles
Average Speed: 2.6 knots
Max Speed: 8 knots (don't think so!)

Email ThisBlogThis!Share to TwitterShare to FacebookShare to Pinterest
Labels: ZAMBONI