We could not get winter storage at National Yacht Club, so we are storing the girl at the Whitby Yacht Club.  Today is the day to deliver ACE to Whitby.

Michael, Carson, and I met at National at 10am.

Winds were forecast to be 12-18 knots from the SW, PERFECT for a spinnaker run to Whitby.  It was also forecast to be cold, so we all had several layers on.

We set out with a full main and #2.  Winds were lighter than expected, maybe 5 knots, but from the SE.  We motor sailed to the other side of the Leslie Street Spit.


We tried to sail for a while without the motor, but would have run aground at the Scarborough Bluffs at 2 knots.  We motored futher out into the lake, perhaps 5 miles and hoisted the spinnaker when the wind angle was deep enough to head towards Whitby.

We got going between 4 and 6 knots for about half an hour before the winds died down to a couple of knots and shifted toward the east.  We doused the spinnaker and motor sailed with the main the rest of the way. 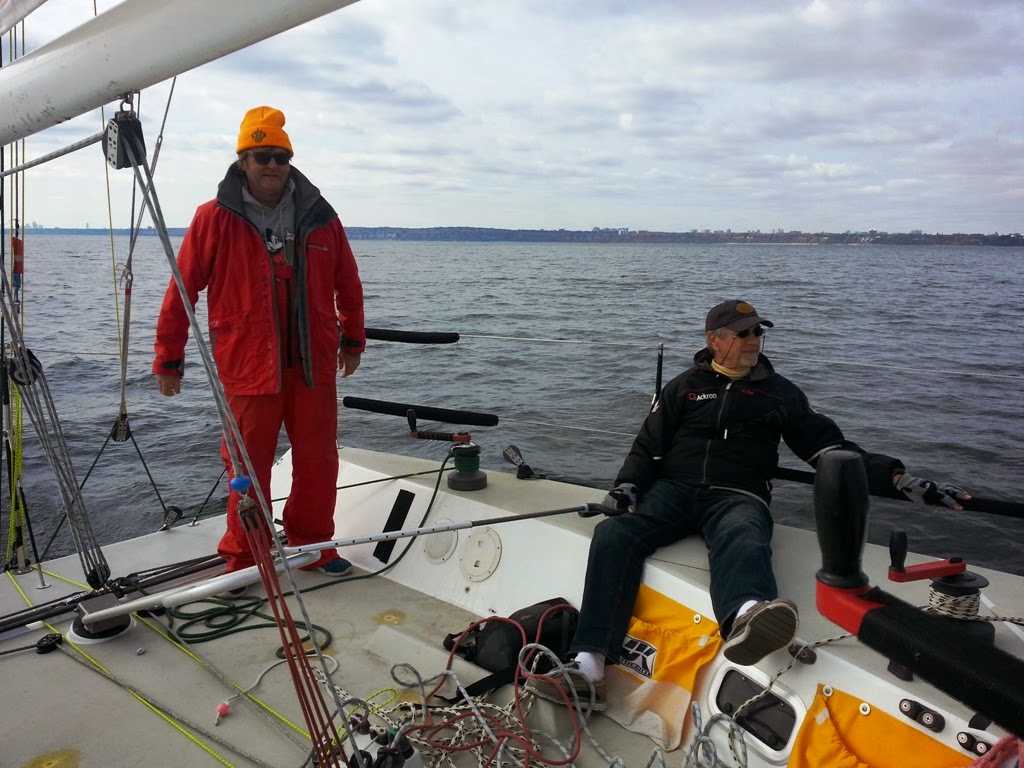 We dropped the main on deck in the channel.  We got stuck in the channel coming into WYC by dock 6.  We hoisted the #2 and heeled the boat over to plough through the mud.  You could see that the water levels had dropped significantly in the last week.  ACE drafts 7ft 3in, and our depth meter was showing 5 1/2 ft.  It took us about 30 minutes to get to our assigned slip, where we had 7 1/2ft of depth.


My most enjoyable sail so far on Ace.
Delivery sails are often the best "Get to know the boat"sails and without stress, try different positions and see what works and what does not.
3 of us, Mike C., Bart and myself, took on a 5 hour trip in forecast brisk winds, that only materialized for short periods on a lake that remained flat all the way.
We had the racing main the whole way, with a mix of spinnaker and number two, sometimes touching 7 knots but long stretches of 5-6 and the occasional motor sail.
The wind was fluky which gave Mike C some issues and at one point we were wing on wing as the wind rotated over 90 degrees
Two puffs had us on our ear with no helm, which was good practice!
The only other excitement was finding no water at Whitby YC.
Took us almost 1/2 hour to struggle in through soft lumps along the bottom to our dock.
We left at 11.00 am and arrived at the harbour 5 hours later then the struggle in.
The engine performed flawlessly.
Looking forward to having her out and available for winter projects.